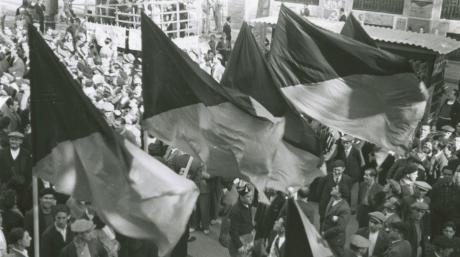 PERFORMANCE ACTION took place on 1st May 2013 at the Bombed-out Church.
Re-enactment of the first meeting between Nellie and Jim.
Re-thinking of Spanish anarchist thought in Liverpool.

Ste was Mr J. A. Willox, MP for Everton from the end of the 19th century.
Lorena was Lorenzo Porter and Francisco Ferrer.
Gary was James Dick.
Lena was Naomi Ploschansky.

The Institute are currently involved in developing a theatrical performance about The Liverpool Anarchist Communist Sunday School (1908 – 1916,renamed into The International Modern School in late 1909) together with Lorena Rivero de Beer and Ste Higginson. This is about rethinking radical history and asking questions about children’s education and critical thinking. More information about The Liverpool Anarchist Communist Sunday School (1908-1916) is available through anarchist magazine Organize here.

Alexander Mall, Islington Square – which is 5 minutes walk from the Institute

We are interested in researching Naomi Ploschansky who set up a number of Anarchist Schools in East End and James Dick who set up the Liverpool Anarchist Communist Sunday School. Both were inspired by the work of radical Spanish educationalist and anarchist Francisco Ferrer. Jim and Nellie met in London for May Rally in 2013. They worked together in a number of schools in London before setting off to USA in 1917 and becoming the pioneers of the Modern School movement there.

From Barcelona with Love http://libcom.org/blog/barcelona-love-spectre-spanish-anarchism-liverpool-15122011

Francisco Ferrer ‘The Origins and Ideals of the Modern School’ (1913)