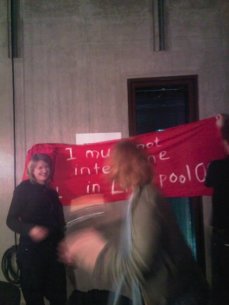 We’ve been a little bit naughty at the Bluecoat Arts Centre in Liverpool for the Black Market for Useful Knowledge and Non-Knowledge. We were a bit worried that many artists and ‘experts’ were being appropriated by Liverpool 08. We staged a domestic argument, annoyed an expert next to us, Gary got on the table, Lena drank champagne and painted our banner with words: I MUST NOT INTERVENE IN LIVERPOOL 08.

Video of the full event by Leon Seth

We’ve held AGM December – to coincide with the closure of Liverpool 08 and the onset of the monster hangover of post08, an AGM took place in Dubrovnik, Croatia! This gave twoaddthree a chance to digest the very heavy Christmas cake ‘Viva Dissent’ whilst deciding what to do in 2009.